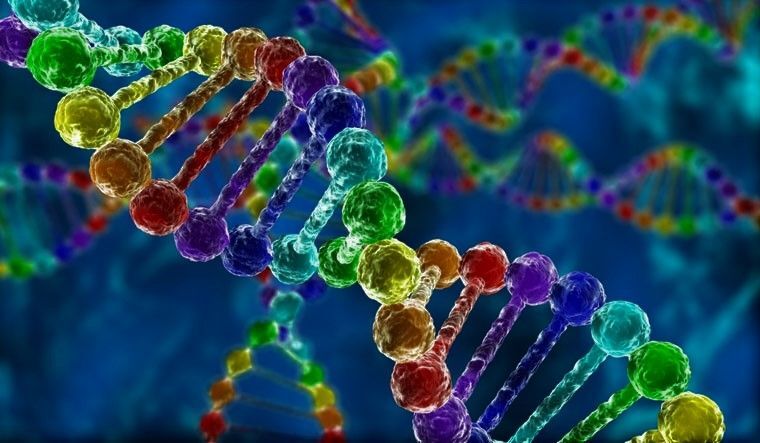 This year the healthcare sector, and in particular the small and mid-cap biotechnology companies, are experiencing a phase of significant underperformance.
There are many reasons for the downturn, which has become more marked in recent weeks.
Firstly, there has been a resumption of the downward trend in approvals of new drugs by the FDA. Since taking office, the President of the United States, Joe Biden has appointed Janet Woodcock as interim head of the FDA. But, according to federal law, Woodcock can only hold the position until mid-November, unless Biden appoints a permanent head. In that case, Woodcock would continue to occupy the position until the Senate appoints a permanent head. Public health leaders say that leaving the agency for so long without a permanent head has contributed not only to demoralisation among staff, but has also sent the wrong message as regards the importance of the agency itself.
The appointment of a permanent head of the FDA, expected by the end of the year, would however help the sector to recover. 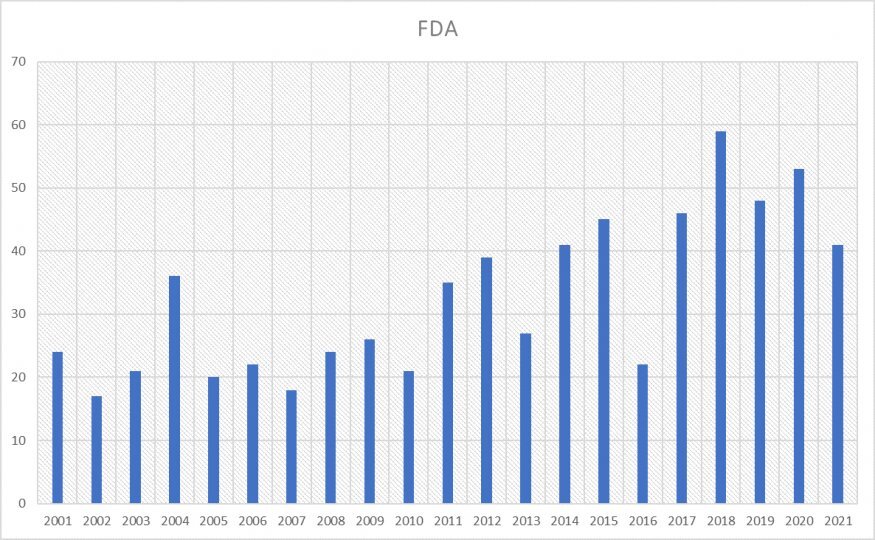 Secondly, we are seeing a gradual recovery in merger-and-acquisition activity after a 2021 characterised by few deals. For example, Sanofi has announced an agreement to acquire Kadmon Holdings for $ 1.9 billion in cash. Last month, Pfizer announced its intention to acquire the cancer drug developer Trillium Therapeutics for $ 2.3 billion in cash, at a premium of over 200%. Another example of the upturn in M&A activity is Merck’s recent acquisition of Acceleron for $ 11 billion. M&A deals often target small-caps and the recent deals show that they can benefit from such investment. 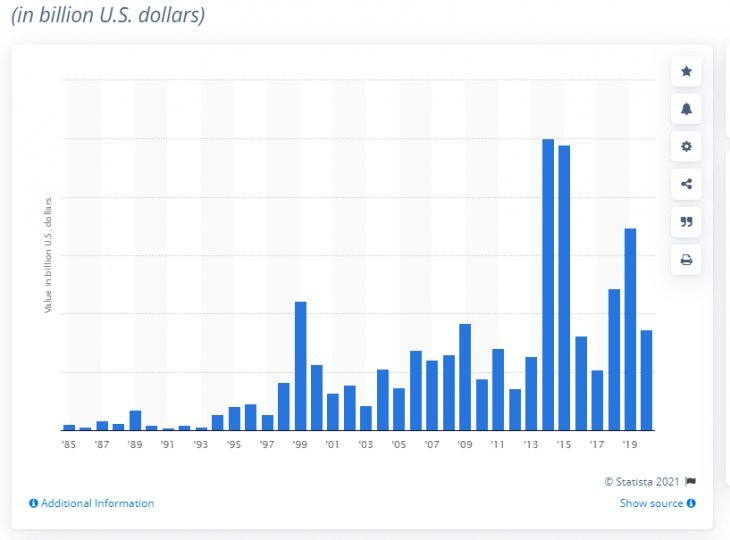 The underperformance of the healthcare sector has impacted all countries, including developing ones. The regulatory uncertainty that has affected the Chinese healthcare market has in fact slowed down the whole sector, despite the fact that the medical innovation market in China is growing so fast (from $ 1 billion in 2016 to $ 180 billion) that for the first time it has overtaken the United States in terms of the number of new drugs approved. The fastest-growing therapy areas are vaccines and oncology (60% of the drugs approved), which can be attributed to the impressive numbers recorded by China itself, which accounts for 30% of cancer-related deaths worldwide and 24% of newly-diagnosed cases. The main consequence of this has been the high number of international agreements with European and American companies, such as the $ 2.2 billion agreement with Novartis AG for the development of the BeiGene Ltd drug, an antibody similar to Merck’s keytruda and Bristol-Myers Squibb’s opdivo, which aims to help the immune system attack different types of cancer. 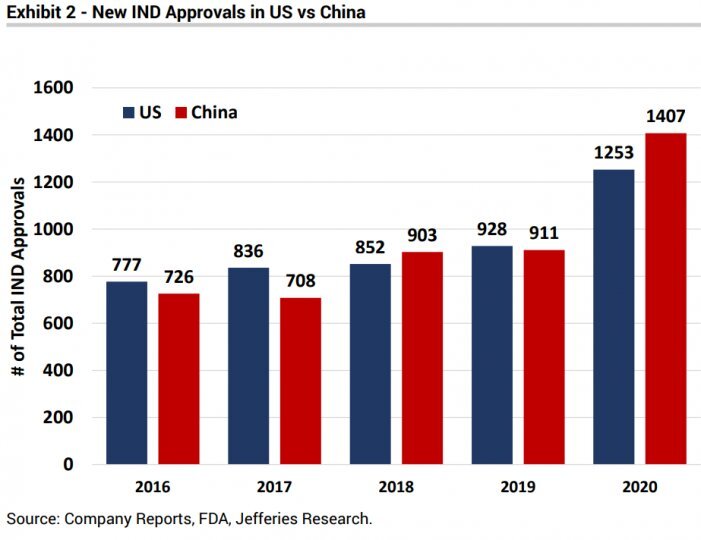 In addition to the reasons mentioned above, at Pharus we believe that long-term investment enables participation in medical innovation, in terms not only of vaccine research, but also a number of pioneering fields, such as:
The recovery of the small companies expected in the coming months, in combination with the long-term trends, will help the sector and the funds that invest in it, such as Pharus Sicav Medical Innovation, which, focusing on the small-caps in the healthcare sector, has since the second quarter of 2021 shown a clear correlation with the US small-caps represented by the Russell 2000 index. 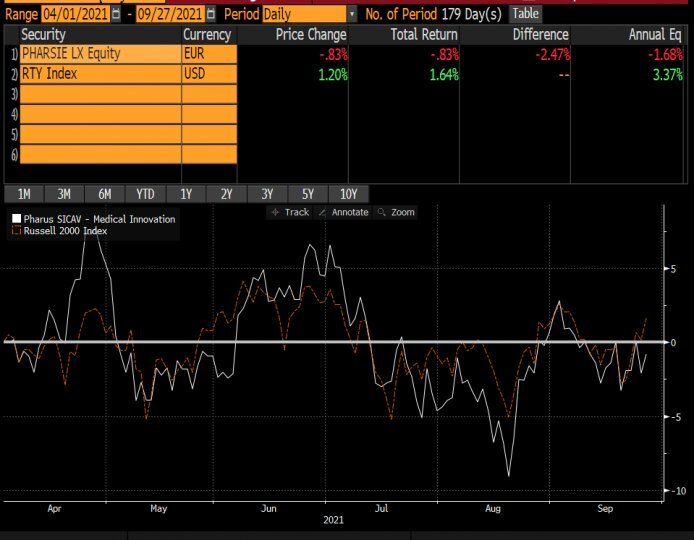 Back to all news
Information message - The information in this message is produced for information purposes only and therefore does not qualify as offer or recommendation or solicitation to buy or sell securities or financial instruments in general, financial products or services or investment, nor an exhortation to carry out transactions related to a specific financial instrument.
The contents of this informative message are the result of the free interpretation, evaluation and appreciation of Pharus Asset Management SA and constitute simple food for thought.
Any information and data indicated have a purely informative purpose and do not in any way represent an investment advisory service: the resulting operational decisions are to be considered taken by the user in full autonomy and at his own exclusive risk.
Pharus Asset Management SA dedicates the utmost attention and precision to the information contained in this message; nevertheless, no liability shall be accepted for errors, omissions, inaccuracies or manipulations by third parties on what is materially processed capable of affecting the correctness of the information provided and the reliability of the same, as well as for any result obtained using the said information.
It is not permitted to copy, alter, distribute, publish or use these contents on other sites for commercial use without the specific authorization of Pharus Asset Management SA.
RELATED CONTENTS