Despite the angst  caused by the 65% increase in oil prices this year, concerns about a return to 1970s-style stagflation are exaggerated and the developed world, at least, can probably handle even more expensive crude without too much stress. There are in fact three main reasons why Oil even $ 150 will not lead to stagflation.

1. Oil intensity in the economy

Energy intensity is significantly lower than in the 1970s. The volume of oil consumed per unit of gross domestic product  fell by 56% between 1973 and 2019, according to the Center for Global Energy Policy at  Columbia University. 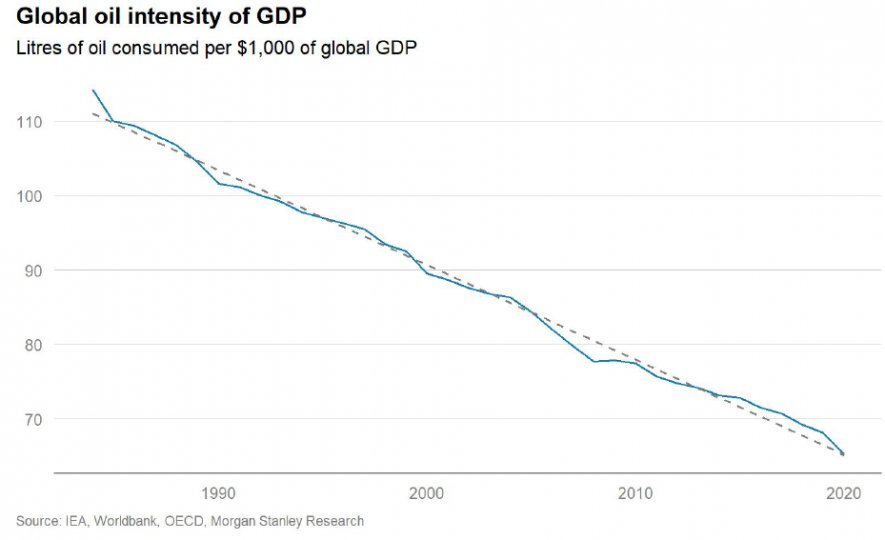 In conclusion,  to give a concrete  example of the limited impact on the real economy, it is enough  to consider that end-users such as motorists still rely on gasoline, but thanks to technological advances, the average American car gets about 25 miles per gallon  compared to 13 miles in 1975.

2. Economic sectors in the 1970s compared with today

An example of the declining importance of oil in the economy can be analyzing the weight of commodity-related sectors in the S&P500, which has changed dramatically over the last 50 years. The industrial sector has gone from 86% in 1976 to 8% today. 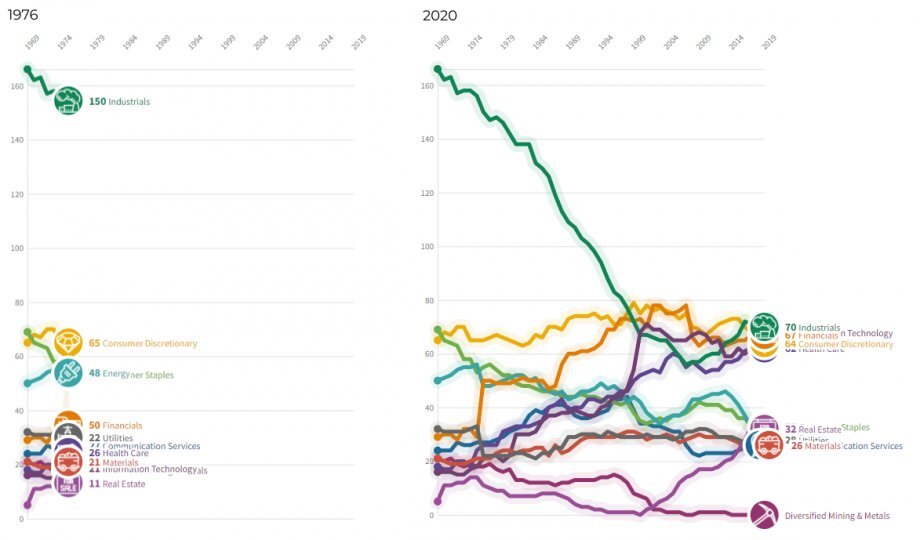 Furthermore, if we want to compare the oil levels of the 1970s to the present, we also have to consider that in the last 50 years inflation but especially the stock markets have grown more than the value of oil:

However,  risks need to be considered. According to some analysts, oil prices historically become problematic when energy costs exceed 8.8% of global GDP, levels last seen in 2008.  As of the 8 October, the  energy share was was 5.6%, so we are still far from the threshold.
More attention should be paid to emerging markets , which may be more affected by higher oil prices in the short term.

In conclusion, the reduction in the intensity of oil use in the economy, driven by the digital transformation that has changed the global economic structure, reducing the weight of traditional sectors in favor of tech, has made economies less dependent on commodity trends of the matter. For this reason, looking at oil values in the 1970s and comparing them with today makes little sense. Economies are able to sustain much higher oil values than in the past before this can create problems for the economic slowdown. In the short term, the negative effects may affect sectors and countries that are more dependent on the raw materials, such as the emerging economies , but they will not affect the US economy, for example, where technology and communication are predominant.
Back to all news
Information message - The information in this message is produced for information purposes only and therefore does not qualify as offer or recommendation or solicitation to buy or sell securities or financial instruments in general, financial products or services or investment, nor an exhortation to carry out transactions related to a specific financial instrument.
The contents of this informative message are the result of the free interpretation, evaluation and appreciation of Pharus Asset Management SA and constitute simple food for thought.
Any information and data indicated have a purely informative purpose and do not in any way represent an investment advisory service: the resulting operational decisions are to be considered taken by the user in full autonomy and at his own exclusive risk.
Pharus Asset Management SA dedicates the utmost attention and precision to the information contained in this message; nevertheless, no liability shall be accepted for errors, omissions, inaccuracies or manipulations by third parties on what is materially processed capable of affecting the correctness of the information provided and the reliability of the same, as well as for any result obtained using the said information.
It is not permitted to copy, alter, distribute, publish or use these contents on other sites for commercial use without the specific authorization of Pharus Asset Management SA.
RELATED CONTENTS